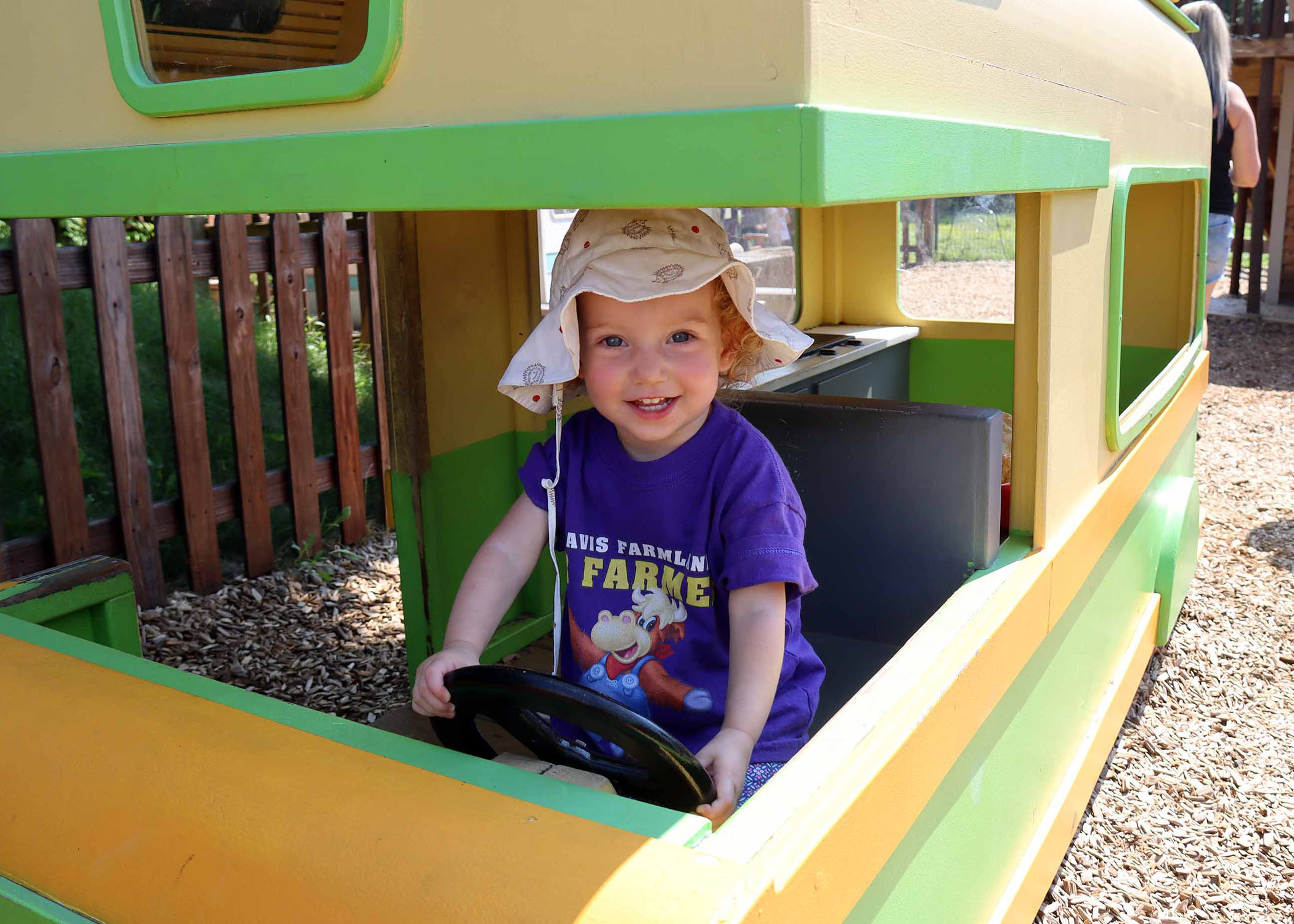 Howdy folks…My name is Moo Moo. I’m Farmland’s mascot, tour guide and furry friend all rolled into one. Nice to meet you! As you can probably guess, Davis Farmland wasn’t built in a day. There’s a whole lot of history here, and I’d love to take a few minutes to share it with you.

It all started seven generations ago, when George Davis, a farmer from Westford MA, moved to Redstone Hill Road in 1846. Since then, generations of Davises have lived and worked on this very spot.

If it’s farming, you can bet that the Davis Family has done it. They’ve operated a dairy business, complete with home delivery service, a roadside fruit stand, vegetable gardens, forage crop fields (see photo – notice the truck cab under the mound of hay,) a cider mill, timberlands, lumber mills and even mining operations, but that’s not all. Many Davises have also held important agricultural positions off the farm. In fact, Jonathan Davis was not only the founding President of Agway, but you also may have seen him rubbing elbows with President Lyndon Johnson after Mr. Johnson appointed him Board Chairman of the Federal Farm Credit Banking System.

Two days after the tragedy, a friend gave the Davises three “rare” or endangered highland cattle and let me tell you, it really boosted the Davis’ morale to have these bizarre cattle grazing out in front of the burned dairy barn. Wouldn’t you know it, within days people were driving down their quiet Redstone Hill Road side street just to catch a glimpse of these crazy looking creatures. One man was so excited that he stepped out of his car in the middle of a thunderstorm, with nothing to protect him but a business suit, just to get a closer look. Can you believe it?

Larry Davis has always believed that “Farming practices may have changed over the years, but the values such as preserving the rich farming culture of New England, maintaining open lands, and above all else, the importance of family, remain the same.”
Well, that certainly inspired the Davises. They knew they had something special and decided that they wanted to share it with all of you. So John, Larry and Doug went to work and built a small temporary petting zoo in 1990, (on the existing site of todays’ Davis Mega Farm Festival.)

Before they knew it, the petting zoo had become a home for all kinds of endangered farm animals, not to mention a full-time job for the Davises.

Brook, a Scottish Highland was born in 1991 – Farmland’s firstborn endangered farm animal. She got her name because when she was born, she rolled down an embankment into a brook. First photo: Larry carried the baby safely back to Mom while Dad looked on. Second photo: A mother and child pet baby Brook (AKA Moo Moo.)

A Project of Love

Of course, the Davises didn’t stop there. Since then they’ve been hard at work expanding their vision. They opened the permanent Davis Farmland, Discovery Farm in 1996. The same year John Davis held his namesake first grandson, seventh generation John Davis.

In 1996 Davis Farmland also tested the concept of the first corn maze and then In 1998, the Davises launched the whole new Davis Mega Maze farm park, across the street, that Larry almost single-handedly carved into an award-winning field maze and Doug built all the bridges that made the maze a 3-dimensional thriller including the world’s only double-decker bridge! In the fall, you could find bushels of people wandering lost among the Davises sunlit rows of corn.

In 2000, Davis Farmland realized they did not have enough space to house the largest living sanctuary of heritage (or endangered) farm animals so John teamed up with the San Diego Zoo to create the world’s first “Frozen Zoo” for endangered farm animals, which preserves their animals DNA forever. So you can be confident that you’ll be able to see my furry friends for generations to come.

In 2003, Farmland opened its first major expansion (6 acres) named Adventure Play & Spray, which was complete with the nation’s largest zero-depth spray ground, so you’ll always have a place to cool down on those hot summer days. Doug and his boys explore the new Play and Spray building shell with all new food service, state of the art bathrooms, changing, and nursing facilities never seen before in a farmpark environment.

In 2017 Davis Mega Maze transformed into Davis Mega Farm Festival. The festival is a fall event in September and October on select dates and includes over 50 family fun events including the Grand-daddy of them all – Davis Mega Maze – plus award-winning Kansas City BBQ, live music and craft beer.

The Davises will be the first to tell you that the recent developments at Davis Farmland and Davis Mega Farm Festival are just the latest chapters in the rich history of their farm and their family. As John always says “Over the generations the Davis family has always trusted that hard work and innovation will keep agriculture alive and well in Massachusetts.” The Davises strive to make Farmland a place where these values can flourish for generations to come.

We invite you to join us in celebrating our heritage while looking towards the future.

Thanks for a Moo-velous season. We wish all of our Farmland friends a safe and healthy winter. We look forward to seeing everyone again in the spring of 2023.

Are We Open Today?